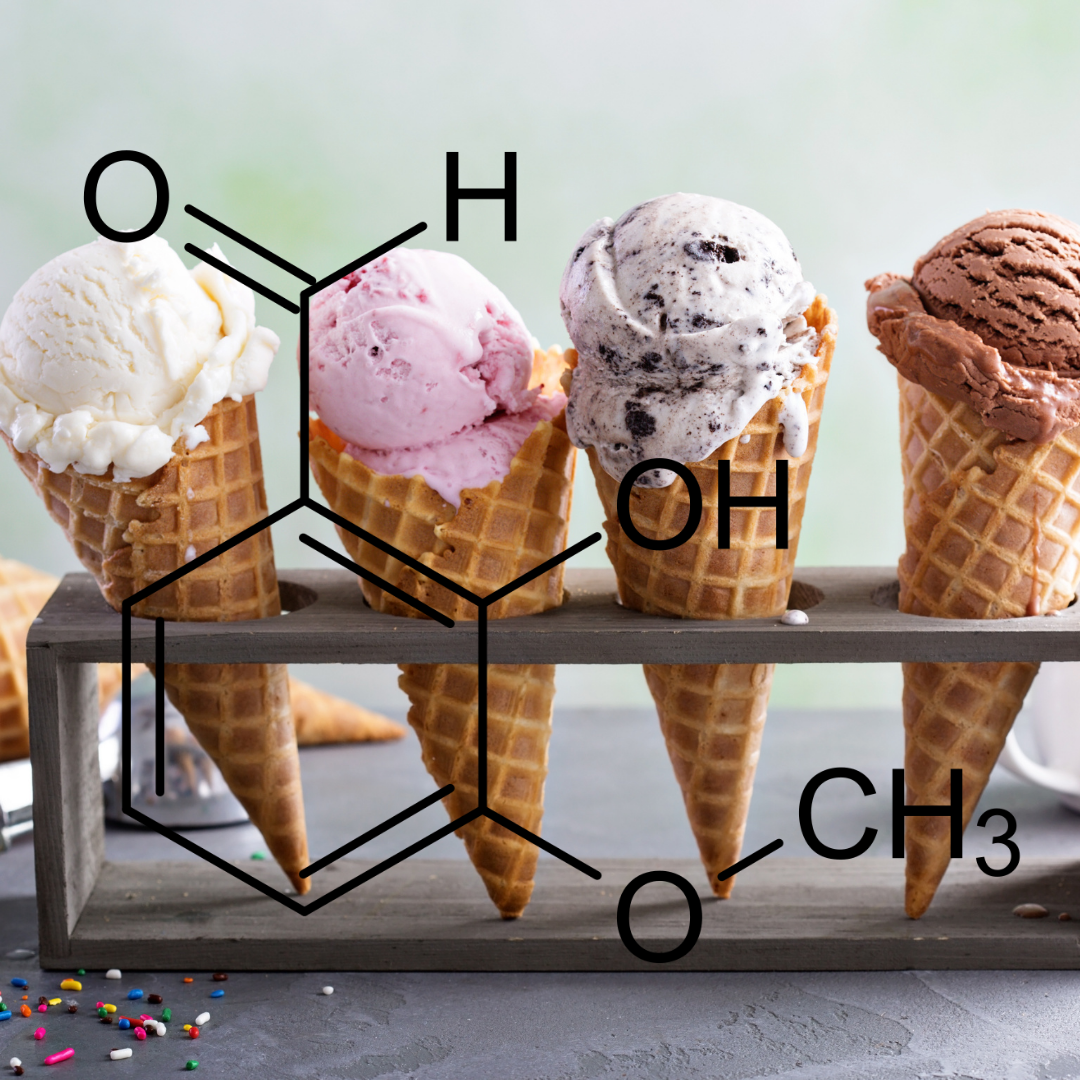 What is your favorite flavor of ice cream? Do you use flavored coffee creamer? Have you noticed 'natural flavor' or 'artificial flavor' listed in the ingredients on food packaging?

The FDA defines natural flavors as the essential oils or compounds extracted from natural plant material or animal products. Natural flavor can mean one of three things:

It's estimated that 90% of the food purchased from grocery stores contains flavoring synthesized in a lab. To understand why we rely so heavily on natural and artificial flavors, let's look at the example of vanilla.

Vanilla, the most common flavor in the world

Vanilla is an ingredient in the recipes for most baked goods, chocolate products, and ice creams. Vanilla beans are obtained from hand-pollinated flowering vanilla orchids in a handful of tropical areas, most notably Madagascar. They are a precious commodity. There is no way to grow enough vanilla to meet the worldwide demand.

Vanillin, the chemical compound that gives vanilla its signature profile, can be synthetically derived from other sources in a lab. The chemical structures of pure and synthetic vanillin are exactly the same. In addition to vanillin, Imitation vanilla products may also contain ingredients such as water, sugar, caramel color, propylene glycol, and, oddly enough, artificial flavor. The cost of imitation vanilla is much lower than the pure product and is more readily available.

Some of the flavor and aroma of pure vanilla can be lost in baking due to the high temperatures, so that imitation vanilla flavor will be fine for baked goods. If you're willing to pay for pure vanilla extract, keep it for no-bake treats, simmered sauces, custards where it can be added away from the heat, and frozen desserts.

Recreating natural flavors can take time. You might think of Willy Wonka, but flavorists are highly educated scientists with a bachelor's degree in chemistry or food science, a master's degree, and an apprenticeship to become certified. There are approximately only 500 flavorists worldwide, and most belong to the Society of Flavor Chemists. This is a very secretive society because flavorists are ethically bound never to reveal their creations or clients. After all, the flavors are the secret sauce for individual products in the competitive food industry.

The process of creating a flavor is expensive. It requires constant safety testing and must meet specific standards. Flavorists generally combine 40 to 80 ingredients, including essential oils and natural botanicals, and synthetic chemicals to get the same smell and taste for natural and artificial flavorings. Inedible ingredients like wood pulp or petroleum (yes, petroleum!) can also be used to create flavors.

Flavoring is added to food to increase its taste and aroma. It has nothing to do with nutrition, so the FDA doesn't require food labels to say what's in their "natural flavor" unless the ingredients include a common allergen like milk, egg, fish, shellfish, tree nuts, wheat, peanuts, or soy.

An article in Scientific American makes the argument that artificial flavors undergo rigorous quality control at every stage of their creation. Many artificial flavors taste identical to the natural flavor and are obtained with less damage to the environment.

There is currently a great deal of debate regarding health problems caused by food additives, such as flavors and colors. Organic purists believe that these additives can cause a variety of problems, especially in children. However, researchers at the University of Minnesota point out that more consideration should be given to sugar than artificial flavors which are generally present in very small amounts.

In the end, if you want to know what's in your food, you should make it yourself from simple ingredients.
Meet The Flavor Wizard
Vegan Doesn't Always Mean Healthy
© 2022 The Business of Food, LLC. All Rights Reserved.